A Visitor from Ann Arbor 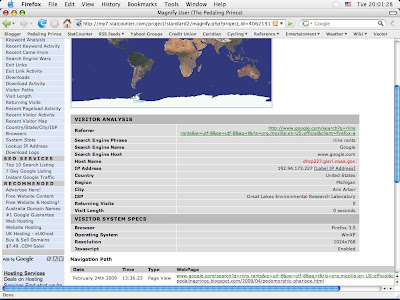 "Great Lakes Environmental Research Laboratory" in Ann Arbor huh? Well, whoever it is landed on my blog as a result of a Google search for "Riin's Rants" and ended up at my posting The Pedomorphic Pharisee.

Well, if this person was looking for info on Riin, he/she certainly got an eyeful...

Nice to know my humble little blog is managing to spread some truth about her, particularly to someone who lives in her hometown who, presumably, has the opportunity to meet her in the flesh; at least it gives this poor person a chance to polarize the hull plating before they get subjected to Riin's ruthless reviling (and her small-minded views eventually give her reason to do that to everyone she meets sooner or later).
Posted by Unknown at 8:34 PM No comments:

No matter how much we learn about love, it seems we're all vulnerable to making the same mistakes.

Not my selfishness; theirs.

Not that I haven't been selfish sometimes. We all are; it's Human nature. However, there's a certain threshold of selfishness one should not cross. When one wants one's own way from time to time, that's normal, even natural; when one starts to think they're the center of the Universe and everything revolves around them, that is when one crosses the line from healthy selfishness to excessive selfishness.

Lisa's mother died on January 12, 2009. I was devastated. She was good to me for the 12 years Lisa and I were together. She did a lot for me, and she loved me; I've always appreciated that. So I decided, though Lisa and I weren't speaking at the time, that I wanted to go and pay my respects to her. I went to her wake to say goodbye.

Pretty much the moment I came in the door, one of Lisa's relatives approached me and said, "Thank you for coming out; we really appreciate it. However, Lisa doesn't want to see you; we're going to have to ask you to leave."

I was not prepared for that. I would have left on the spot except that my mother and my sister were still inside and they had to drive me home; I couldn't leave until they did. Eventually, they came out and said that Lisa had spoken to her father and that they'd let me in after all to pay my respects. Of course, after the way I was "greeted," I was profoundly uncomfortable. It was all I could do to go in for 15 seconds and say my goodbyes before I had to get out of there.

At first, I didn't fully register what Lisa had done. I knew her mother's death had hit her hard and I was still thinking about how much she must be hurting; I wanted to help. However, as time has passed, I've had time to go over what happened in my head and to discuss it with my friends. We all came to the same conclusion:

Asking me to leave the wake was the most profoundly selfish, childish act Lisa has ever been guilty of.

If there was ever a situation where Lisa should have put aside her differences with me, even if only for the two days covering her mother's wake and funeral, this was it. But she couldn't. Instead, she made her own mother's wake all about her. I wasn't there to see her; I was there to say goodbye to her mother. But, of course, in Lisa's world, everything is about her; in her world, the mere fact that I'm there means I must be there to see her.

It's not like this is something we can go back and do later; she robbed me of my one and only chance to say goodbye to someone I loved.

What love I had for Lisa died that day. I cannot forgive her for that. Ever.

Then, there's Riin. Her rabbit died. Those rabbits are like her children; they mean everything to her. Out of kindness, I express a simple condolence. Instead of appreciating it, or at least keeping her mouth respectfully shut, she decides to vilify me in public on her blog for it. I can almost hear what she was thinking: "He's just using my bunny's death as an excuse to talk to me."

Once again, it wasn't about her personally; it was just one Human being expressing condolences to another. I would do the same for anybody. But again, like Lisa, Riin thinks everything in the Universe is about her. That's why she has a blog. She thinks that what she thinks is the most important thing in the world and that everyone should listen to her because she knows better than everyone else so she blathers on her blog to spread her "wisdom" to the world.

Great loss, particularly death, has a way of revealing a person's true colors. In the case of both Lisa and Riin, death brought out their fundamental selfishness. Despite Riin's assertion on her blog that she "practice[s] compassion towards all living things" and Lisa's claims that she still loves me, neither one of these women are capable of compassion. To them, their feelings are more important than anyone else's; if people have to get hurt so they can be happy, so be it.

At the risk of sounding arrogant, I think that what I've discovered about love is something that very few people nowadays realize. However, even after all I've learned about love, I still am vulnerable to bad relationships. That's the frightening part: knowing what I know didn't help me; I still made all the same mistakes everyone else does.

I have a friend who once went through the exact same crap I did. Their "significant other" treated them just as badly and took them just as for granted as Lisa did me. I gave them good advice; I told them this person was beneath them and that they needed to get out. I know that's good advice. I know it's the right thing to do...

So why is it so hard for me to do it?

That's why I worry about this friend. I know what they're going through. Unfortunately, that also means I know how hard it is to do the right thing and I'm afraid they're going to get trapped and abused in a bad relationship for years.

I have another friend who I, for the most part, disagree with as far as relationship philosophy goes. However, they were right about one thing. Before I met Lisa, indeed before I even had my first romantic relationship, they once said to me, "You're going to fall for the first woman who shows you any attention, then you'll get stuck with her and regret it."

Lisa was the first woman to ever show me any attention. I grabbed the opportunity, pushed the relationship into physical intimacy way too fast before I learned anything about her. Then, being the hopeless romantic not wanting to have my first relationship fail, I then spent the next 12 years trying to convince myself Lisa was something she was not.

Did I learn from that? No. I did the exact same thing with Riin. It wasn't as bad; at least I was friends with her for a few months before we became romantic and it took me only five years instead of 12 to figure out her true nature. Nevertheless, however, it was the exact same pattern all over again: I got into a romantic relationship way too fast before I took the time to really get to know the woman.

I thought I was in love with Lisa and Riin. I did love them... but I don't know anymore if I was ever really in love with them.

I don't love them now. Not anymore.

I've said here before that I've been "in love" with four women, including Lisa and Riin. Now, examining my feelings for all four, I realize I've only ever truly been in love with one of them. I've known this woman for a long time and we've never had a romantic relationship. So, in her case, I know I haven't blinded myself by making the relationship sexual like I did with Lisa and Riin; with her, I know, for the first time in my life, the love is real.

Despite how I feel, however, I don't think I'll ever pursue her. I may understand love, but that apparently doesn't help me; I still screwed up twice. This woman means the world to me; I do not want to lose her. I'd rather have her as a friend and keep her in my life than try pushing it and risk losing her. Besides, although she loves me, it's clear she's not in love with me; I respect that.

Of course, that doesn't mean I would oppose it if our friendship ever evolved to become romantic on its own; I'm just not going to try to make it happen. I'm just going to be thankful that this woman is in my life and let our love guide us to whatever fate wills. If it ever does become romantic, I'll take things extra slow to make sure that our relationship is solid enough that, if the romantic relationship doesn't work, I won't lose my friend.

I guess I figured love out; I just haven't figured out relationships. It seems that the two things, while related, are definitely distinctly different things.

As far as relationships goes, I think Bonobobabe* is far wiser than me. She made a recent posting on her blog about how she was going to approach a relationship she was considering; it's probably the best article I've ever read anywhere about how to get a relationship off to a healthy start.

When it comes to romantic relationships, I think I'll follow her advice from now on.

*Regarding this link: I said in a previous posting that Bonobobabe didn't want anyone linking to her blog. However, when I asked her for permission to re-post her posting on relationships here to share it with a wider audience, she told me that now allows people to link to her blog. So, for the record, the link is with her permission. ;)
Posted by Unknown at 5:14 AM 3 comments: