For the Love of Grayskull - Intro

This is a primer for those who wish to read my He-Man and the Masters of the Universe-based screenplay, For the Love of Grayskull.  I strongly recommend reading this before reading the screenplay itself; a link to the screenplay appears at the bottom (or if you're reading this from the main page of my blog just keep scrolling; it's the entry immediately below).

If you are an adult who, as a child, was a fan of the series during its original run in the mid 1980s, you are the audience at which this screenplay is aimed.  This is not a story for children; this story deals with very adult themes.  If this script were produced into a movie as is, the resulting film would be R-rated, but only just.  The truly R-rated content is used sparingly for dramatic emphasis; it is not the focus of the story.

I don't want to give away too much but I should warn you:  if you love these characters, you may be upset by what happens to one of them.  However, I would urge you to keep reading; though the character's experience is horrible and painful, it becomes a catalyst that profoundly changes their life for the better.

I did some extensive research on the Filmation interpretation of He-Man and the Masters of the Universe while writing this; most of the things established in my story are drawn from events that actually happened in episodes.  That being said, I've included some screen caps from a few episodes so you'll get a clearer idea what the characters look like.

There was an episode in the first season called "The Witch and the Warrior" where Teela and Evil-Lyn, the latter stripped of her powers, were stranded in the desert together.  During this episode, we discover that the black thing on Evil-Lyn's head is a helmet, not her hair; she actually has short white hair underneath.  Here are three different screen caps from that episode showing what Evil-Lyn looks like without her helmet; this is important as she spends most of this story without it: 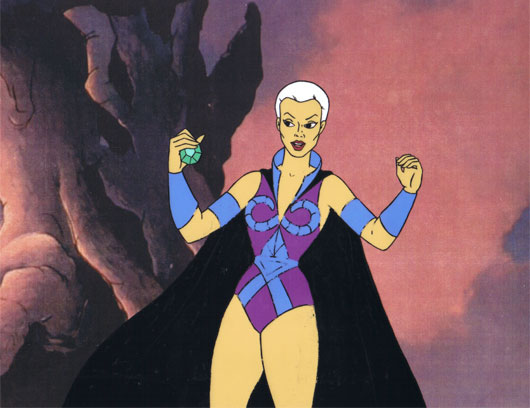 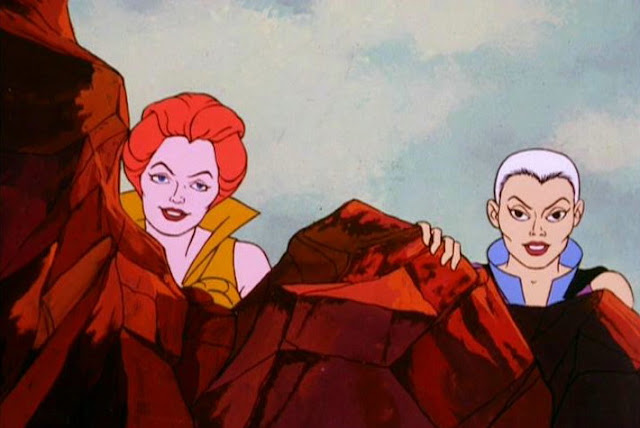 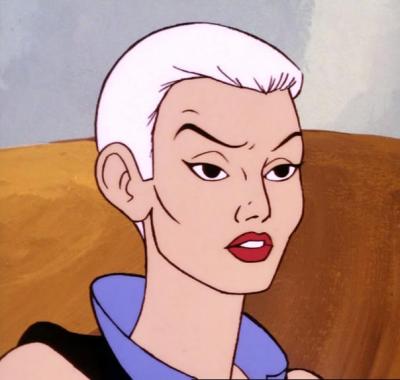 There was a second season episode, "Origin of the Sorceress," which, as the title implies, tells us how The Sorceress of Grayskull came to inherit her position; we learn her name is Teela Na and that she once lived in a quiet village named Nowella.  We're shown what Teela Na looked like as a young woman before she became the Sorceress.  As my story shows the Sorceress without her headdress on several occasions, these pictures show what her natural hair under it looks like: 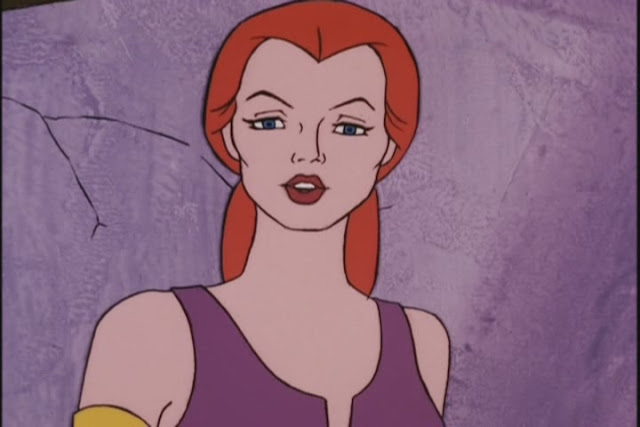 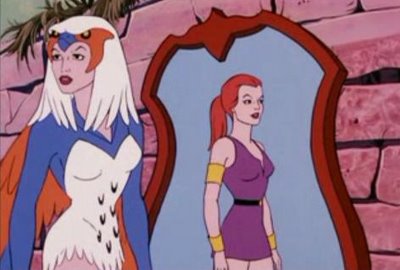 This screen cap is from the 2002 remake of He-Man and Masters of the Universe.  I tried to stick entirely to screencaps of the Filmation interpretation of the characters but had to make this one exception since this character, Veena Grayskull, the first Sorceress of Grayskull, never appeared in the Filmation cartoon.  Nevertheless, to properly visualize a portion of the story you need to know what she looks like: 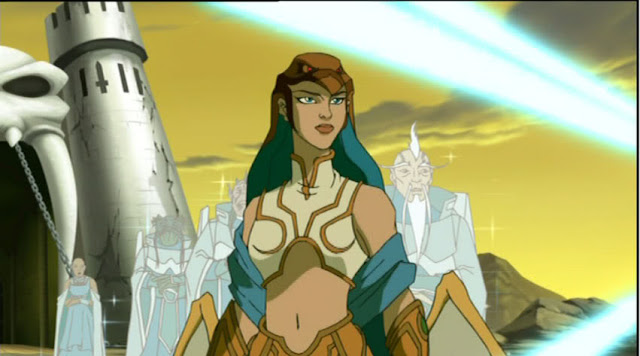 There are several points in this story where specific songs are used directly in the film.  Each time such a song is referred to in the screenplay, the text referring to it will be a link to a YouTube video of the music, suitably edited to sound as much like I'd pictured it used in the story as possible and showing screen caps of the screenplay synchronized to the music to try to give you an idea how I pictured the scene.

The last of these videos actually gives you a rough idea of what the final credit sequence would look like.  It utilizes some footage I found on YouTube that, while not exactly what I had in mind, is close enough that it should give you an idea how I pictured these credits appearing.  I included names of the original voice actors (with the exception of Linda Gary who, unfortunately, has passed away) because I had pictured the characters with their original Filmation-era voices.

Those of you who'd rather have a physical screenplay to read are welcome to print this so long as you keep it intact with the title page (with Writers Guild of Canada Registration Number) and dedications.  However, the script on this blog is optimized for screen viewing; it doesn't print very well.  If you'd like a PDF of the screenplay, preserving proper pagination for printing, please email me; I'll be happy to send it to you.

OK, now that the preliminaries are out of the way, click the title to be taken to the script itself:

For the Love of Grayskull!